Interaktionslabor, the media lab founded by Johannes Birringer, celebrated its 10th anniversary (in 2013) on the grounds of the former coal mine Göttelborn (Germany). n the summer of 2014 the lab completed its third book publication: “Manifesto of interactive art.”

Edited by Johannes Birringer and Klaus Behringer (for PoCul Publishers), the book describes the history of the interaction laboratory and its gradual evolution into one of the most unusual cultural phenomena of the Saarland region. Since 2003, this autonomous media lab has attracted artists, engineers and computer scientists from around the world, offering two-week residencices every summer for the exploration of the artistic potential of new interactive media. The participants experimented with software and sensors, performance, sound and film compositions, conducting research into interactive architectures and real time processes. They also developed prototypes for productions that were later presented on stages or in galleries, while debating the possible outlines of a manifesto. This book takes stock not only of the interactive experiments, but also of these programmatic and poetic discussions that took place over the past years.
After a historical review of the laboratory by its founding director (introductory chapter), the book presents two versions of the manifesto in German and English, followed by seven further chapters written by members of last year's laboratory, including a video essay by Turkish artist Hayriye Koç Basara, a critical essay on interactive dance by Italian choreographer Vanessa Michielon, and a detailed analysis of interactive wearables by British designer Michèle Danjoux who had prototyped several of her remarkable costumes in Göttelborn. The American dancer Anna Kroll reflects the phenomenon of temporality in art, while Vanessa Vozzo writes about interfaces in interactive installations. Local authors Uschi and Andreas Schmidt-Lenhard enrich the book with humorous meditations on the problem of interaction, while co-editor Klaus Behringer offers a moving account of his "outsider perspective" as a photographer and longtime observer of the working methods of the laboratory. The longest chapter in the book transcribes the "Göttelborner Debates” on the apparent impossibilty of a “manifesto” for interactive art, illuminating contentious issues, technical and philosophical implications, and the social and political significance of contemporary media practices.

The book is available in bookstores or can be ordered at http://www.pocul.de/html/buecher/manifest.html.
An overview of all projects can be found on the website: http://interaktionslabor.de

This project participates in the transeuropean research project METABODY: Media Embodiment Tekhne and Bridges of Diversity (EU Culture Program). It has received support from the Ministerium für Bildung und Kunst des Saarlandes and Saartoto Gmbh, as well as from IndustrieKulturSaar (IKS) and Willi Meiser Computertechnik.

Throughout the history of civilization, dance and madness have been intricately linked to each other – from the Dionysian Mysteries of antiquity
to contemporary flash mobs and techno raves. Individual and collective states of exception have found expression and reflection as well as
cathartic healing through dancing. "Tanz und WahnSinn/Dance and ChoreoMania" presents a provocative collection of interdisciplinary studies
on dance and madness combining historical, cultural, schizoanalytic, medical, philosophical, therapeutic and artistic perspectives
that explore the phenomenon. 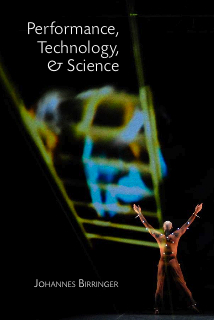 see announcement on dance tech net
for ordering go to the distributor:

This ground-breaking work of scholarship explores convergences between performance and science through an investigation of new
technologies that drive computer-mediated, interactive art. In tracing the evolution of digital performance within a particular
history of engineering and theatre that now expands to a wide range of practices in dance, design, architecture, fashion, games, music,
robotics, telematic performance, and "post-production"-theatre, the author focuses on interactive performance, installation and Internet art.

Internationally known practitioners and their works are introduced to formulate provocative ideas on computation, complexity, emergence
and self-organizing systems in contemporary peformance which are inspired by biology and biotechnology. Wide-ranging and richly
illustrated essays uncover shifts that have occurred globally in the aesthetic understanding of performance within computer-augmented
virtual and networked environments.

The work of key artists, theatre/dance companies, and laboratories demonstrates how scientific concepts have influenced digital performance, and how performance relates to neuroscience, biology and the life sciences. Challenging common assumptions about embodiment and the digital, this study addresses how artists use
artificial intelligence, machine learning, and sensing technologies not only to enhance the range of expression and visualization, but to bridge the gap between the work and its user.

Tanz im Kopf / Dance and Cognition (Yearbook No. 15) is a bilingual anthology of new dance studies reflecting the annual research focus proposed for 2004 by the German Association for Dance Research. The title refers to tendencies both in contemporary dance practices and in dance scholarship. The discursive thread of the eighteen essays collected in the book runs from a historical understanding of dance which tended largely to separate dancing from thinking to the current proposition that dancing is thinking. Theoretical considerations regarding contemporary concept dance are examined along with sociological dimensions of dance culture and pedagogical concepts. Intercultural projects are included and analyzed along with approaches to dance improvisation and dance experiments with media technologies.

The discussion forum "Dance and Science" offers a special focus on various new research approaches in the cognitive neurosciences and experimental psychology and their impact on dance research and aesthetics. The essays in this forum present innovative models for the analysis of cognition and movement, and provide a critical framework for examining the influence of media and visualization technologies in dance production and research. Observational analyses of sensorimotoric behavior yield new findings that are relevant both for composition and performance practice as well as for dance pedagogical and therapeutic methods and improvisational techniques. This yearbook breaks new ground in international dance research advocating a strong cross-disciplinary emphasis on aesthetic and scientific investigations of performance and cognition.

PERFORMANCE ON THE EDGE
Transformations of Culture

Performance on the Edge takes the reader on a journey across geographical borders and conceptual boundaries in order to map out the new territory of contemporary theatre, dance, media arts and activism. Working across social, cultural and political fault lines, the book explores performance as both process and contact, as the commitment to political activism and the reconstruction of community, as site-specific intervention into the social and technological structures of abandonment, and as the highly charged embodiments of erotic fantasies.
Performance on the Edge addresses the politics of community-oriented and reconstructive artmaking in an era marked by the AIDS crisis, cultural and racial polarization, warfare, separatism and xenophobia. Provocatively illustrated with work from North and Central America and Eastern and Western Europe, the book challenges our assumptions about the relations between media and activism, technological imperatives and social processes, and bodily identities and virtual communities.

MEDIA AND PERFORMANCE: ALONG THE BORDER

This book examines the border line between performance and the impositions of reality. Birringer discusses the performance aspects of such political events as the breaching of the Berlin war, the destruction of Sarajevo, and gay liberation (including the act of "coming out" itself) and also shows how the dance -- a "movement of fantasy" -- has been mediated by technology and political consciousness. The blurring of this border line has been more often appreciated -- and seen as necessary -- by artists than by critics, as was seen when Arlene Croce, writing in The New Yorker, denounced Bill T. Jones's performance Still / Here for incorporating the video testimony of individuals dying of AIDS.

Birringer begins by tracing the origins of avant-garde dance and then shows how it has been transformed politically in, for example, the anachronistically utopian work of the Slovenian choreographer ivanidov; sexually, in the awkward yearning expressed in the performances of Pina Bausch's Tanztheatre company; and technologically, as in the work of the Australian performance artist Stelarc, who literally wires himself into robotic machinery and imaging equipment. Later chapters explore the creation of digital-based interactive art such as Dancing with the Visual Dervish; Virtual Bodies created by Canadian artists Gromola and Sharir or "The Cave," a virtual reality environment at the University of Illinois; the use of video in the works of performance artists such as Vito Acconci and Naim June Paik and the creation of video sculptures such as Francesc Torres's Oikonomos, which was never exhibited due to a protest by the Metropolitan Museum of Art over the artist's plan to install a video monitor on the genitalia of their copy of a statue of Zeus; and the use of video and agitprop performance in political activity, including protests by the gay activist group ACT UP and the disquieting performances of the former pornography actress and sex worker Annie Sprinkle. Birringer ends with a discussion of the continuing incursions of business into digital media, including the "imperialism of technological enhancements" as experienced in the culture of constant "upgrades" and the omnipresence of Bill Gates.

What do the theater, Los Angeles, and a bodybuilder have in common?
Although the combination seems unlikely, new and innovative drama studies construe these and other postmodern "constructions" as part of a theoretical paradigm that relates |textuality' to performative and cultural production. Making short order of the demand for poststructuralist analyses of contemporary drama and performance, Johannes Birringer formulates a "second stage" of theater studies by demonstrating that cultural production and representation affect more than technology, shaping aesthetic models and ideologies of the subject as well.

In Theatre, Theory, Postmodernism, Johannes Birringer explores the theory and aesthetics of performance understood as a social practice struggling with the growing impact of technological and electronic culture that reduces human experience and transforms our relationships to reality, the self, the body, and the social imaginary. His critical investigations focus on recent developments in theatre, dance, performance art, video and multimedia performance, and he makes a series of aggressive forays into the relationships between theory, critical discourse nd social history.
As response to the dematerializing and dehumanizing effrects of postmodern technologies, Birringer argues for the reinvention of theatrical consciousness based on the experienced of thye dispossessed body-in-performance. Among the artists discussed are Robert Wilson, Laurie Anderson, Pina Bausch, Heiner Mueller, Meredith Monk, Eugenio Barba, Squat Theatre, Philip Glass, Joseph Beuys, Nam June Paik, and Karen Finley.

For further information on book, video and audio releases, contact: