Johannes taught a workshop on "New Environments/Parameters for Dance Technologies" at the Dancing with the Mouse Conference at TCU, Fort Worth, October 13. This is a conference for practitioners striving to integrate their knowledge of where dance education and technology intersect.

In November, Johannes participated in the "Cross Fair" Symposium on Intelligent Stages, organized by the Choreographisches Zentrum NRW in Essen, Germany.

In December, Johannes joined a brainstorming conference at the ISA (Arizona State University) for the creation of ADAPT, a new partnership in telepresence/telematic projects.

From May 7 -13,, Johannes participated in the Second International Conference on Art and Technology at the University of Brasilia. Brazil. He also lectured at the Semiotics and Dance Graduate program at PUC in Sao Paulo. A new work, the "Vespucci" film installation, was shown in Brasilia and Sao Paulo.

From May 18-20, Johannes presented new research ("Dance and Network Environments") at the "Subtle Technologies" Conference in Toronto, Canada. For more information on the event, visit the "SubtleT" website

From May 25-27, Angeles performed in a new play directed and created by the Canadian company dadaKamera. The play was shown at the Wexner Center for the Arts in Columbus.

On May 25, Serena Lin's new video installation opened at Women and their Works Gallery in Austin, Texas.

In October, Johannes organized a roundtable on "Dance and Telematics" for the CORD Conference in New York City. In November, Johannes presented a film lecture on dance media at the Tanzhaus Duesseldorf (Germany), and then gave a film lecture on "Dance and Telepresence" at the congress "Wissen schaffen über Tanz", Akademie der Künste, Berlin, Germany

On December 14,, members of AlienNation Co, met at the TransArt Foundation in Houston to look at films of recent projects by Serena Lin, Wendy Aldwyn and Johannes, and plan the next production phase in March 2002.

in March, Johannes participated in the Production Research Forum "RealTime" organized by CYNETEart (Dresden) and the O1plus Institute in Nuernberg (Germany). Plans were made for the creation of an interactive environment during a workshop at Hellerau in July 2002. "East by West," collaboratively created by Sher Doruff, Orm Finnendahl and Johannes Birringer premiered in July 2002 at the Festspielhaus in Hellerau, and will be recreated at DEAF 2003 in Rotterdam (The Netherlands).

November 2002: premiere of "Here I come again/Flying Birdman," a polysite telepresence performance involving 5 remote sites in the US and 2 sites in Brazil.

December 2002: "finally a place..." opens at the Trans-Site Studio in Houston.

May 2003: "Body Art and Technological Transformation," workshop directed by Johannes at "Flesh Made Text," conference at Aristotle University, Thessaloniiki, Greece

December 1-4 2004 "Synaesthesia and Multimedia," University of Erfurt, Erfurt. Johannes is one of four guest artists directing this workshop.

September 2005: "The emergent dress," dual film exhibition, shown at Wearable Futures, Newport, Wales. This is an extension of the DAP LAB project Johannes initiated with Michèle Danjoux in Nottingham.

November 28- December 4: Digital Cultures Lab and Conference: Johannes organizes an international dance and technology workshop and festival, which features new dance works, screenings, and installations, with the week-long event ending in a conference attended by more than 200 delegates.

Aliennation Co. members meet in Houston to start production plans for "After a Life: Journey to the Center of the Earth". In addition, company members began writing-project for a book on "Theatre and Video."

In the spring of 2006, Johannes Birringer directed two workshops in dance and new media/telematics, in Istanbul, Turkey (TECHNE Festival), April 1-8, and in Sydney, Australia (Performance Space), May 1-7. Out of the Sydney workshop, a collaboration emerged on a film installation with Daniel Kojta and a group of video artists: Alien Presence H [handmade echo] is presented at the 2006 Sidney Biennial.

He also has co-produced a cycle of production workshops for "I-Map," a trans-european theatre project that connects four media labs (Athens, Sofia, Amsterdam, Goettelborn) in four different countries. The last workshop before the public premiere of the work in Athens (September 2006) was held at the Interaktionslabor Goettelborn, Germany, the interactive medialab Johannes founded five years ago (http://interaktionslabor.de). The "I-Map" project was awarded an EU grant by the EU Culture 2000 framework program, and culminated in the production of the live game, See you in Walhalla, first shown at Athens in September 2006. Walhalla was invited to the Greek Theatre Festival in June 2007, and is now touring internationally.

In May 2006, Johannes delivered a keynote address to the annual conference of the German Society for Contemporary Theatre and Drama in English (CDE) at the University of Augsburg, Germany. At the IN TRANSIT festival, an annual performance event created by the House of World Cultures, Berlin (Germany), he conducted a lab on neuroscience, mind-body relations and dance research together with choreographer Jayachandran Palazhy (India) and Fabiana Dultra Britto (Brazil). At the Performance Studies International conference on "Performing Rights," June 2006, he moderated a roundtable on "Duty of Care" with Australian performance diver Sarah Jane Pell and Arts Catalyst curator  Rob La Frenais. In September, he presented films on new prototype developments of the 'ScreenDress,' with fashion designer Michèle Danjoux, at the DRHA festival, Dartington College of the Arts. Another exhibition of this digital project was shown at CLEAR, the Center for Landscape and Environmental Arts Research at Cumbria Institute of the Arts in Carlisle in October 2007. A new version of the Kluver film was featured at the Prague Quadrennial "design in motion" festival in June 2007.
In December 2006, Johannes directed a dance-technology workshop studio on "Inscribing Dance in a New Space"  at the biannual Monaco Dance Forum in Monte Carlo, the leading international dance festival dedicated to new media technologies in the art form.

Angeles Romero submits grant application to Houston Arts Council and is awarded an Individual Artist Grant Award, funded by the City of Houston through the Houston Arts Allianceshops. During her grant residency, she completed writing her latest, and most substantial play to date, "Puntos de Fuga" (Vanishing Points). A public stage reading was held at Talento Bilingue, December 21, 2007.

In  April, Johannes gave the keynote presentation at the opening of the "Ideas in Motion" festival at CYBERARTS Boston, USA.  Canções dos olhos was screened at SARC's spring concert series in Belfast (Northern Ireland) on February 1, 2007. In the spring, he also directed a masterclass for the Movement, Sound and Network Project at SARC Belfast, which concluded with the premiere of The Cube - an audio-visual interac tive installation  - on June 4, 2007.

On June 12-13, Johannes directed a panel discussion on new developments in choreography for the Screen/interactional choreography at the Moves International Screen Choreography Conference in Manchester.

In mid-November, he directed the "Movi-Lab" in digital performance at the a_m_b_e_r 07 Festival in Istanbul, Turkey, and delivered a keynote address on current experimental work in the performance field. Later that month, he acted as coordinator and editor for the CYNET Computer Art Festival07_encounter in Dresden (Germany). This year's event is named "Telematic Plateaux" and features several telepresence installations at Festspielhaus Hellerau.

Bodies of Color, a workshop directed by Johannes Birringer and Michele Danjoux for Intimacy: Across Visceral and Digital Performance Festival, Goldsmiths University of London

The premiere of the new design-movement work Suna no Onna, with fashion designer Michèle Danjoux and the performers and digital artits of the DAP ensemble, was December 8, 2007, at the Laban Centre, London, in conjunction with a workshop festival on "Intimacy: Across Visceral and Digital Performance", curated by Goldsmiths College.

The company under the production development leadership of Angeles Romero submits several grants (including a large scale Capital Grant application) to raise funding for the production of Puntos de Fuga (Vanishing Points).

In the summer of 2008, Johannes directed a masterclass at Belo Horizonte's 9th International Theater Festival in Brasil. In the spring and summer of 2008, production rehearsals for a new chamber opera, Corpo, Carne e Espirito, created with composer Paulo C. Chagas, will be completed. 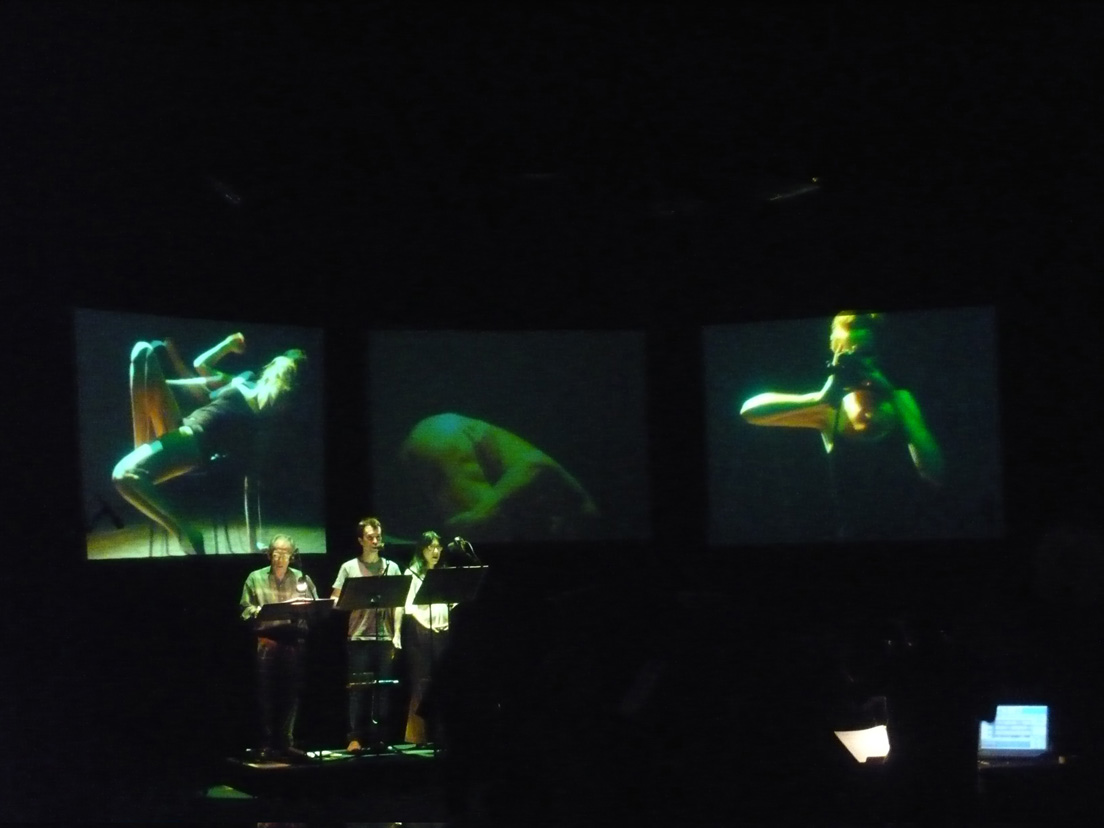 Johannes participates in the CYNETart 2008 Post Me_New ID Forum, and is featured in a panel with Martin Kusch (kondition pluriel)

Performance, Technology, and Science (new book by Johannes) is published in New York. 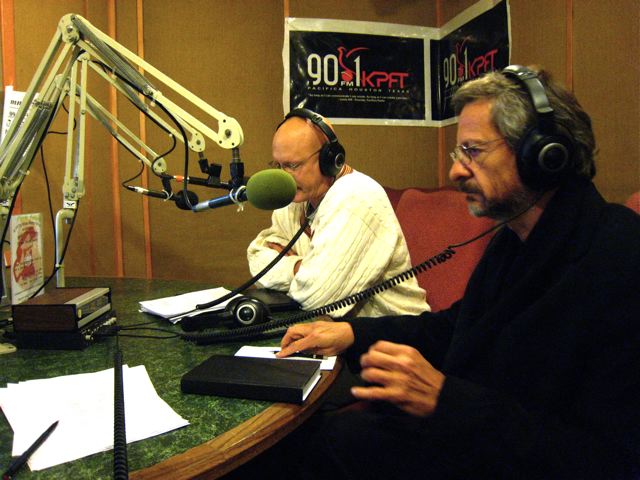 Tokyo UKIYO Lab, December 3 - 13. Johannes and members of the London DAP-Lab ensemble work in residence at Keio University's Mixed Reality Lab, developing the extended version of UKIYO, a choreographic installation first presented in London in June 2009. The installation then toured in Slovenia in June 2010 and finally premiered at Sadler's Wells, London, in November 2010.

This symposium and performance laboratory initiates a series of annually held research events at Brunel University's Antonin Artaud Performance Centre, bringing together an invited group of international theatre and dance artists, musicians, digital artists, art theorists and researchers engaged in creative practices that reflect on major innovative performance traditions of the past century and their impact on current performance knowledge and physical (or physical-digital) techniques.
The first instalment of the ARTAUD FORUM is dedicated to the memory of Kazuo Ohno and the complex convergences/ differences between Japanese and Western performative methods. The symposium and workshop are composed of dialogue and performance practice, intermixed with film screenings, a live performance and a photographic exhibition

The "Workshop Words," as the late Kazuo Ohno called reflections on his practice, are published online on our ArtaudForum website and links to performance films/documents are below insided the program.: Workshop Words
The keynote speakers provide important stimulus to the conference from various perspectives, informing & challenging our thinking onthe conference theme.

Johannes Birringer
"Theatre Histories: The Archive and the Repertoire"Introducing trans-cultural perspectives on the study of theatre histories and practices, choreographer and media artist
Johannes Birringer (Artistic Director, AlienNation Co, Houston / Professor of Performance Technologies, Brunel University, London)
will lecture on Indian theatre and Kathakali dance, Chinese and Japanese theatre including Beijing Opera, kabuki, noh,
and butoh. During the first two hours, there will be be a presentation of ideas and screening of relevant material to provide a context and point of
reference for the subsequent practical workshop, which will be mostly focused on butoh.

Throughout the history of civilization, dance and madness have been intricately linked to each other – from the Dionysian Mysteries of antiquity
to contemporary flash mobs and techno raves. Individual and collective states of exception have found expression and reflection as well as
cathartic healing through dancing. "Tanz und WahnSinn/Dance and ChoreoMania" presents a provocative collection of interdisciplinary studies
on dance and madness combining historical, cultural, schizoanalytic, medical, philosophical, therapeutic and artistic perspectives
that explore the phenomenon.
The book is also on the website (with audiovisual materials)
http://www.choreomania.org

The radio talk will become available as a podcast.